Online orders will continue to be processed as normal and usually received by 2:00 p.m. shipped the same day. Unfortunately, phone and email support is currently very limited. The current processing time for emails is approx. 2-4 working days!

We ask for your understanding that there may be delays in delivery due to the circumstances. We currently work in special shifts almost around the clock and do our best to process all inquiries, orders and returns / exchanges in turn as quickly as possible.

What is the meaning of "UFS - Universal Frame System" ?

Until 2001 Frames were fixed with different screwing or rivet on the particular Aggressive Skate. Therefore, an exchange or resp. renewal was difficult or partly impossible. The producers only offered original frames and so an individual design of the skates was almost impractical!

In the year 2001 a change came: The company SALOMON released the first UFS Skate: ST Aaron Feinberg. This skate was equipped with an UFS Frame. UFS stands for Universal Frame System. UFS Frames were only fixed with the skin with two allen screws, which have the same distance between screws on every skate. 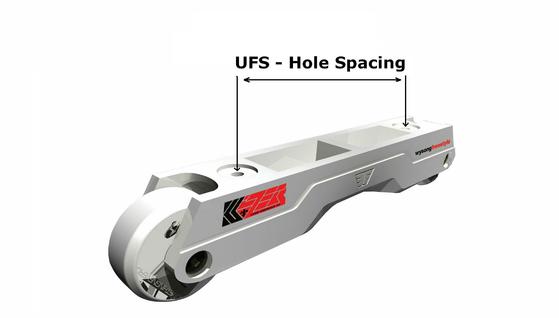 All UFS Frames have the same distance between screws (like all skates) – no matter in which length (size) they have been produced.

Obviously, it does not make any sense to fix a small frame on a 47er skate, as the frame would be too short and the skater would not have any balance. Also, a 38er skate with a big frame would a) not look good and b) be not mobile enough.

From 2001 every new skate on the market was equipped with UFS. In the meantime we have only UFS skates! Even skates for children are produced with UFS. Since we have UFS, every skater has the possibility to skate with the frame, which corresponds with its own requirements.

Even the materials used and the ungainly design have changed and enhanced. Meanwhile there are companies on the market which are specialised only on the production of UFS Frames. There are a lot of ideas which could be realised. There are no limits for design. Therefore, the skaters have more and more possibilities to design their own skate and express their own skate style.

UFS Frames are available in different styles with different characteristics. UFS Frames: From the standard version frame, which is used for skating on 4 wheels to anti-rocker frames, which you drive only with 2 wheels as in the middle a big grindblock replaces the wheels. There are also spring mounted wheels on the market which make skating on uneven streets easier and they help to reduce the bounce if you fall.

It is often a long way until you find the best frame for you which fullfills every personal requirement. For example, very hard frames slide really good on rails, but only mean on curbs. You have an advantage if you use very big grooves on curbs – but for rails they are sometimes too big and therefore drive badly. You should check out for which range you want to use your frame, as not every frame fits perfectly for street skating or parking skating.

On the market you find many frames of different producers. All several variations can be categorised in only three groups: Flat Frames, Antirocker Frames and Freestyle Frames. The frames show different qualities which are described in the following text. 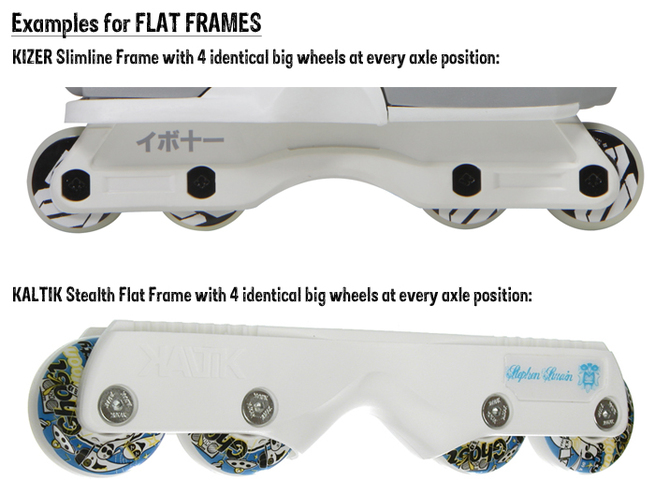 Flat Frames are in a way designed that they can be slide with 4 identical big wheels. This is well suited e.g. for Skateparks and Half-Pipes, as you are very fast and flexible because of the power conducted through 4 wheels. While you are grinding it could happen that the comparatively big wheels could come in touch with the Curb or the Table. This could lead to a blockade and the grind could stop. To avoid this it is possible to assemble instead of a „big“ middle wheel smaller wheels on position 2 and 3. This corresponds with a typical Antirocker Frame. 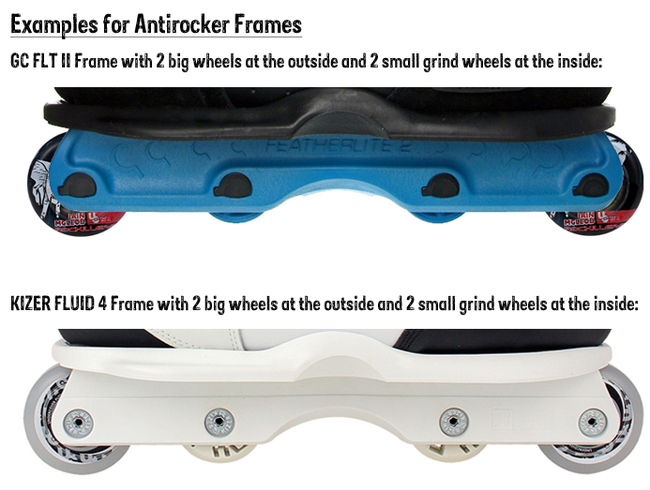 Antirocker Frames are build for grinding with small grind wheels on 2 or 3 wheel positions. By the way this is the most popular type as of the big space between the wheels in the middle (called Groove) they are perfectly locked. The grind wheels avoid locking as they slide as soon they get in touch with the Curb or Table und therefore they give more control while grinding. It is also possible to rebuild an Antirocker to a Flat as you mount 4 wheels of the same size. As the frame is designed for a frame for an Antirocker you can use wheels of a maximum size of 56 or 57 mm. 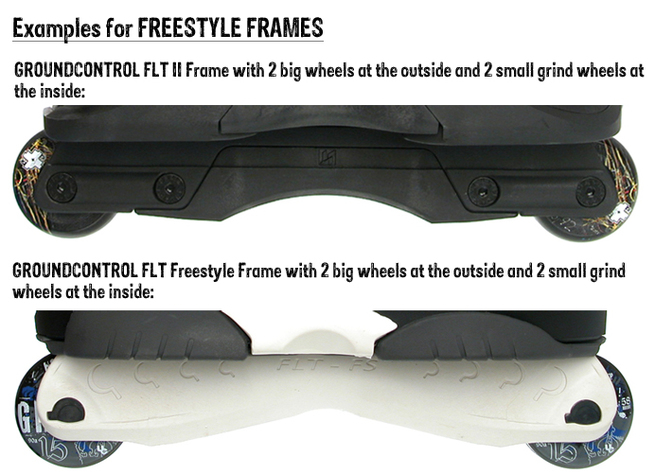 Freestyle Frames are characterized by an enormous big groove. This is strongly pronounced as the wheels in the middle are completely replaced. The lock-in on the grinds is easier because of the big groove, as you match Curbs easier for example. Of its own volition Curbs can be towed in the middle of the frame. Furthermore, there is a possibility to grind more expanded obstacles better (e.g. pipes or Paris Bercy Ledges). Beginners like to choose this possibility because it is easier to learn e.g. Royale Grinds. But there are also some professionals who swear by this kind of frame.

Every skater has its own criterias for a frame and often it takes years until you can find the most suitable frame. Not every frame is made of an identical material and has the same grind qualities. Some frames are heavy, some higher, some grind better on Curbs, others better on Rail. But whatever how many different points there are, every individualist finds exactly the right frame.

Rockering means the possibility for horizontal and vertical axles positioning (see also „What’s a Rockerspacer....?“). In the beginning of Aggressive Skater this was possible for nearly all frame types and is affected until today by terms like e.g. Flat and Antirocker. Only a few frames show the typical Rockering type. The different positions of an axle (and also of the wheel) are classified as follows:

„Flat-Rockering“ means to have 4 big wheels of the same size on a frame. The advantage is to be very flexible and fast. But one disadvantage is that during grinding one of the middle wheels could cant and in worst case you could fall down.

What is the meaning of "Rockering" ?

"Flat-Rockering" means to have 4 wheels of the same size on one frame. Your advantage is to be very mobile and fast. But a disadvantage is that during grinding one of the wheels in the middle can cant and, in the worst case, you tumble.

"Anti-Rocker" means you slide on the outside (at first and last roll position) with two big wheels and on the inside with two smaller wheels. Only the two wheels on the outside have contact with the road. Your advantage is that the groove is biggger and the two wheels in the middle could not get caught easily. But you loose mobility and speed decreases. Anti-Rocker is the most used skate mode in the aggressive skating!

"High-Low-Rockering": On first and fourth position are two big and on second and third position are two smaller wheels. All wheels are positioned in a way that they touch the ground (same as flat-sliding). The advantage is that despite of the small middle rolls you have a comparatively big groove, but you do not loose any flexibility or speed. But for second and third position you can only use special wheels.

A groove is always the „notch“ in the middle of a frame. It is exactly this part of the frame with which you lock on the particular obstacle (wall, rail etc) for grinding. If the groove is smaller and more even it is harder to lock in at the wall or rail. A small but deep groove leads the grind very safe and not very shaky as it might be with a broad but less deep groove. This is the reason why many skater have to get used to their skate. If you have the groove in the position you can handle with, the tricks will be much easier.

Extremly broad and deep grooves like KIZER Typ M Frame suit excellent for obstacles which cannot be grinded with conventional standard grooves. Besides that you strike the rail or wall easier because of the broad groove. Especially walls are easier because there are no middle wheels which can get stuck.

Framespacer or Framewasher are the bushings which take the axles in the frame. The axles take the bearing and wheels... 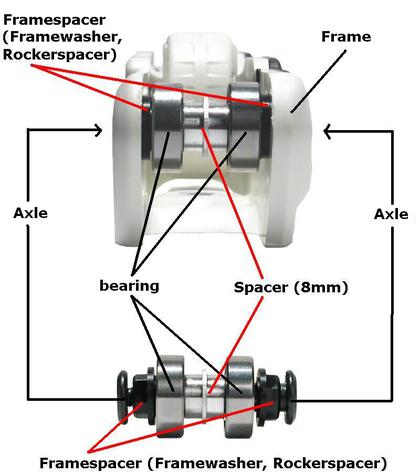 But there are bushings on which the hole for the axle is not drilled in the middle but rather a little bit shifted. These bushings are angled on the outside, so they can be installed in different positions in the frame. The axle hole is always at another position that depends on how the bushing is situated in the frame. Thus height of the axle and therefore height of the wheel can be fixed. The wheels can be positioned a bit forwards and backwards. This depends on the construction of the wheels. Those adjustable bushings are called Rockerspacer. 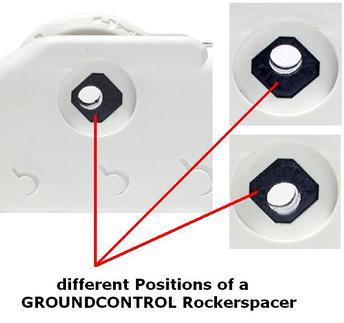 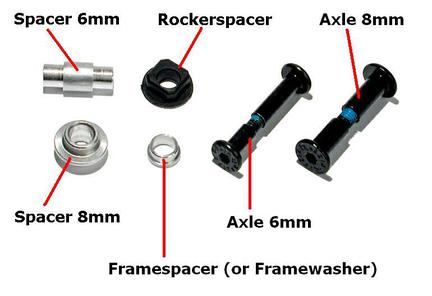 We wish you a lot of fun with skating!

If you have further questions please mail to contact@grindhouse.eu or contact us by phone 06192-290909.